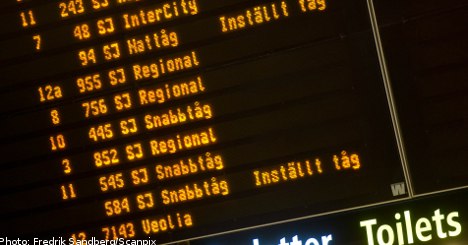 Around 60,000 customers from utility providers Fortum, Eon, Vattenfall, and Härjeån had to make due without electricity overnight into Tuesday, and some 40,000 homes were still without power around 2pm on Tuesday afternoon.

Eon doesn’t expect to have power restored to customers in Gävleborg, Jämtland and Västernorrland counties until Wednesday at the earliest, and Fortum’s customers can also expect to have to wait a while longer for the electricity to come back on.

“We think we’re going to repair the problems sometime today, in all areas except Gävleborg, where major faults are going to take until tomorrow,” said Carola Hjerthén, communications officer at Fortum.

Vattenfall calculated that all customers in the Stockholm area will have power returned sometime Tuesday.

According to Swedish meteorological agency SMHI, a new lower pressure system swept into Sweden last Monday night, bring winds gusts over 70 kilometres per hour to parts of western and northern Sweden, prompting the agency to issue a class 1 warning, the lowest level on the agency’s 3-tiered warning scale.

Meanwhile, night trains in northern Sweden remained at a standstill on Tuesday morning, although national rail operator SJ hoped that night trains toward Norrland and Jämtland could resume later in the day as it awaiting further damage assessments following the new wave of heavy winds.

“We warn travelers against starting their journey as we await an additional prognosis from the National Transport Administration (Trafikverket) about the extent of the damages,” SJ said on its website on Tuesday morning.

Passengers stranded in Luleå, in northern Sweden, however, will be forced to take a bus south to Sundsvall where they can catch the high-speed X2000 train to destinations further south.

Later on Tuesday afternoon, the Transport Administration expected rail service on the Mittbanan line between Storlien and Östersund in northern Sweden to be running again by 6pm on Tuesday, while service between Kil and Hällefors on the Bergslagsbanan line was expected to running during the afternoon.

However, it still remained unclear as to when service between Ånge and Ljusdahl would start up again.