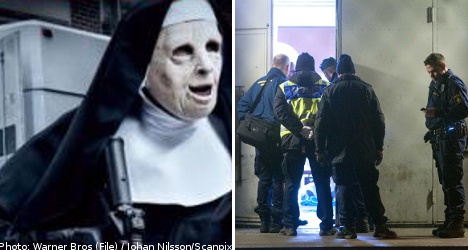 Several witnesses have told police that the perpetrator wore a rubber mask with the face of an elderly man similar to masks featured in “The Town”, said investigative leader J-B Cederholm of the Malmö police.

“We’ve chosen to go public with the photo [from the film] because it corresponds to what witnesses describe,” he told the local Sydsvenskan daily.

“Whether it’s exactly alike or not, I can’t say.”

Some fifteen people were in the café when the shots were fired on Monday evening, and police have interviewed several of these witnesses during the night.

“I was sitting at the table next to the victim. A guy came in with a Halloween mask and a pistol in each hand. He didn’t say a word, he just fired, and fired, and fired. A bullet or two hit the floor, and others hit his friends’ legs and hands,” said a witness to newspaper Aftonbladet.

The 27-year-old victim, who died from his injuries, was sitting at a table playing cards when the masked man entered the café shortly before 8pm on Monday.

Police believe he was the sole target.

Two other men were injured in the shooting. One was shot in the leg and the other in the hand.

They weren’t in the murdered victim’s immediate proximity during the shooting, and told the police that they didn’t believe they were targets.

Most likely, the two were hit in the chaos that erupted when the masked man began firing.

There are contradictory reports as to whether the gunman had one or two weapons, but it has been ascertained that many shots were fired.

The murder likely has no connection to last week’s shooting at a café in central Malmö, according to Cederholm.

“We see no connection today between the different murders that have occurred in Malmö this year.”

According to Sydsvenskan, both of the other men injured in the attack have ties to criminal gangs in Malmö.

Sunday’s killing represents the seventh case of deadly violence in the city with ties to Malmö’s criminal gangs, according to the paper.