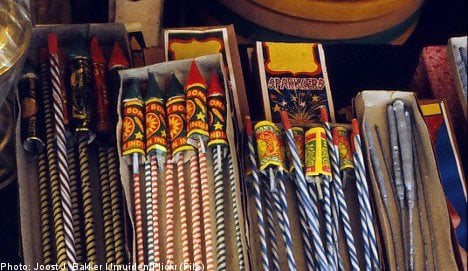 The incident occurred while the youths were returning from having purchased a supply of fireworks they planned to light off help celebrate the coming of the new year.

But their festivities didn’t go according to plan when the fireworks sitting on the floor in front of the passenger seat suddenly ignited and started exploding inside the vehicle.

The driver immediately stopped the car near in central Gislaved, about 80 kilometres southwest of Jönköping, and all four passengers managed to exit the vehicle.

However, there was little the four could do to prevent the rest of their supply of fireworks – some of which was also stored in the trunk of the car – from igniting in burst of fiery explosions.

When the unplanned – and premature – New Year’s fireworks display had concluded, the car was left a smoldering wreck, but neither the passengers nor the driver sustained any injuries, according to Jönköping County police.

A survey by the Trygg Hansa insurance company shows that one in six Swedes plans on shooting off some sort of pyrotechnic rocket to ring in the New Year, Sveriges Television (SVT) reports.

Every year, around 200 Swedes – mostly young boys – are injured by fireworks so badly that they require medical treatment.