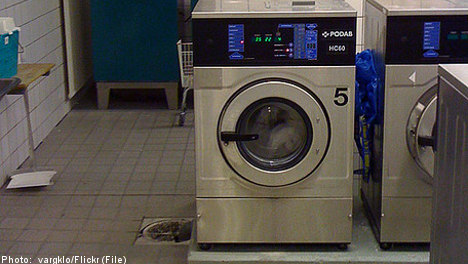 A total of eight washing or drying machines have been taken from student living quarters in recent days, prompting the landlord to hire a private security company.

“We call the police, but no one comes,” Christer Lindgren of the Lindbäck Porsön property management company told the local Norbottens Kuriren newspaper.

Over Christmas weekend, a washer and dryer also went missing from the same laundry room, which now stands empty.

In addition to taking appliances, the suspected gang of thieves also smashed up a number of postboxes and broken into tenants’ personal storage rooms.

The offices of the landlord were also burgled, with 2,000 kronor ($290) being taken from a cash box.

Lindgren suspects the robberies are the work of an organized gang of criminals and remains frustrated at the lack of response from police.

Police claim that no squad cars were sent to the scene because the perpetrators left no trace, according to police records.

“That could be why the conclusion was drawn that there was no reason to go out,” police investigator Inge Barsk told the newspaper.

But Lindgen remains dissatisfied with the explanation.

“Of course there are traces; there was a break in,” he told Norbottens Kuriren.