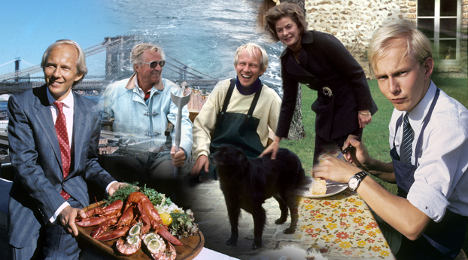 Paavo Turtiainen answers the phone from his apartment near Ground Zero in Manhattan.

It may seem an unlikely place for a humble Finnish farm boy to call home, but then again Turtiainen’s entire career could be characterized as unlikely.

According to his own account, his long-time friends and previous employers, Swedish screen legend Ingrid Bergman and Swedish producer Lars Schmidt, found him, like Moses in the reeds, at the airport in Helsinki “in a basket”.

The famous Swedes whisked the unassuming 19-year-old away with them to Paris, where Turtiainen took command of the celebrity couple’s kitchen.

As Turtiainen puts it, Bergman and Schmidt “adopted” him and taught him how to navigate among the rich and famous.

Eventually, he became their personal secretary, assuming primary responsibility for building up and organizing both Bergman’s and Schmidt’s private archives.

Turtiainen later settled in New York, where he continued his career as an event planner for screen legends, royalty and other eminently recognizable clients.

Now Turtiainen’s unlikely career has been detailed in a new documentary film ”Paavo – A Life in Five Courses” by Finnish director Hanna Hemilä, which is set to air on Friday, December 30th on Sveriges Television (SVT).

TL: What has your association with Ingrid Bergman and Lars Schmidt meant to you?

PT: They and their families became like a second family to me. This continues today even after Ingrid and Lars have passed. My association with them has affected other people who deal with me.

When first I applied for a green card in the US, I went to the US Embassy in Helsinki and found myself sitting across from a petite lady behind a big desk. Before her, she had a huge pile of material that belonged to the application.

Yet, she ignored most of the papers, looked over them and asked, ”So, how was Ingrid Bergman as a person?” We talked about this for about a half an hour after which she just signed the papers.

TL: What is your personal memory of Ingrid Bergman?

PT: There are so many memories, but one in particular concerns the four months I spent with her working from morning to evening helping her to sort her papers, letters and photographs.

She was very distraught. This sort of thing brings out both good and bad memories, and of course there were things she regretted.

I was only 24 at the time and, as she looked back upon her considerable body of work and the life she had led, she got me thinking about what I was going to be and do with my life.

Having now looked back on my own life through the making of the film, I know just how she felt.

TL: What has been the reaction to the film so far?

PT: It is the reactions from the people I don’t know that are most surprising.

Mine is really a story of Finnish farm boy ends up being successful in Manhattan, and it’s all been because I am prepared to ‘float,’ meaning not be fixed in my ideas about who I am, rather just look forward and keep my eyes open.

I think many people are moved by that story of not being stuck in conceptions about oneself, taking opportunities and opening up to possibility. They find it courageous.

TL: What is the most important piece of advice you would give to an aspiring chef and event planner?

PT:It’s heavy work. There is nothing glamorous about it – as television seems to portray the culinary world these days – and you know it when you see everything packed up in the middle of an empty room, which just hours before was a glamorous party.

The film shows how much work goes into one of these events. Yet, it is an adventure each time.

Food is not an exact art and this is what makes it exciting. You can have an idea, and the end product can be better than what you started with, because you are always totally open to something new.

You get a very close look into other people’s lives working with events planning. The most important thing is to use that opportunity to make the client look as good as possible.

TL: What is your favourite dish or ingredient from your mother’s kitchen in Karelia?

PT:My mother and father were very poor but everything we consumed was grown on the farm.

We picked berries and mushrooms, and ate fresh foods. We had it all there – there was such a spontaneity and freshness about it.

I try to bring that inspiration into my recipes.