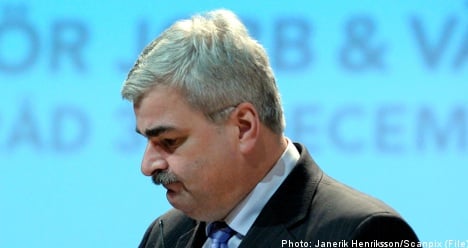 The Moderate party, on the other hand, reached 35.1 percent, while the Christian Democrats stayed just below the limit for the Riksdag with 3.9 percent, reported Sveriges Radio.

Altogether, the centre-right government parties reached 50.5 percent of voters in the survey, while the red and green opposition had 43.2 percent.

“Of course we want better figures than that, but I also know that the internal work that goes on during autumn keep the voters a bit passive,” Acko Ankarberg of the Christian Democrats told Sveriges Radio (SR).

“It has all been about internal work and to develop our policies, but also there has been a discussion regarding the governing of the party.”

The Greens instead continued to climb and reached a record level of 11.9 percent, with many of the voters having jumped over the fence from the Social Democrats following the recent scandals surrounding leader Håkan Juholt, the Svenska Dagbladet (SvD) newspaper reported.

“The Greens have become a stronger and clearer alternative in the big cities and there is an active flow [of voters] from the Social Democrats,” Toivo Sjörén, head of the Sifo polls in Sweden told the newspaper in the autumn.