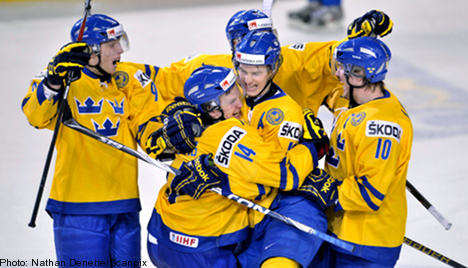 Sweden started the game off well and immediately put pressure on Finland’s net minder, who had a less than perfect game the day before against Slovakia.

Despite that, the Finns managed to get the puck in the back of the Swedish net with less than two minutes remaining of the first period, capitalizing on one of their six shots during the game’s first 20 minutes.

Sweden on the other hand, didn’t manage to get a single one of their 14 shots past the dominating Finnish net minder.

Stepping out into the second period of the game, Sweden put equal pressure on the Finns, but had no real edge against the strategic Finnish defence.

Instead, Finland managed to sneak another puck past Johan Gustafsson after the Swedish defence gave up a puck near the unsuspecting goalie.

The score 2-0 at the start of the last 20 minutes didn’t feel at all representative of the match, seeing that Sweden had produced 34 shots against Finland’s 13, and also had a clear advantage in puck possession.

However, Finland played their cards right and Sweden did not. Not until Sweden’s point producing power play line could finally outwit Same Aittokallio in the Finnish net, with 3:11 played of the last period.

Desperately seeking the equalizer, Sweden’s pressure continued throughout the period against a dense Finnish defence. Aittokallio seemed invincible up until he gave the puck up to the forechecking Johan Sundström who found Max Friberg in front of the empty Finnish net, and the score was 2-2.

The ever so important goal came with only 01:44 remaining of the match, and Sweden had managed to take the game to a 10 minute long Sudden Death period.

The game went to a penalty shoot out after a scoreless Sudden Death period, just like Sweden’s previous game against Russia which they miraculously managed to turn around from a 3-0 deficit and win.

Perhaps that aided the Swedish penalty shooters and goalie Johan Gustafsson when they purposefully stepped out onto the ice.

17-year-old Sebastian Collberg was the first to score for the Swedish team. Max Friberg then scored his second goal of the evening, making the penalty score 2-1, Sweden.

“Coming into the third period we had made up our minds to really put up a fight and we also managed to get that first goal which we needed,” assisting captain Johan Sundström said after the game.

“We showed enormous fighting spirit and team morals, it is among the best things I’ve ever experienced,” Sundström concluded.

Sweden play Russia for the gold medal at 2am on Friday morning.