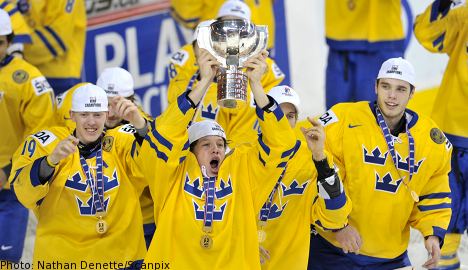 “Every person wearing a yellow shirt is a hero,” said coach Roger Rönnberg to news agency TT after the thriller game.

The Swedish junior team dominated the ice and was soon in the lead on goal attempts with 39, compared to Russia’s four.

The Russians came to life in the third period, coming close to scoring. Luckily, Swedish goal tender Johan Gustafsson was quick off the mark and saved the day again.

However, it started to seem as the dream of winning the gold would remain a fantasy.

But Mika Zibanejad, an 18-year-old from Huddinge, in Stockholm, had other plans. He recently returned back to Stockholm team Djurgården after a season playing NHL hockey in Ottawa.

He had promised team mates that he would score – and he had every intention to keep that promise.

“He told me in the morning he was going to finish this game off,” said team member, forward Jeremy Boyce Rotevall, to local paper Calgary News.

According to the paper, Zibanejad had reiterated the promise just before overtime.

Zibanejad’s goal came in at 10.09 into sudden death overtime.

“You have to decide if you want to win this. In the morning, it was a joke. But now, it’s not a joke anymore,” he told the paper.

“I didn’t have time to think that much. I felt an enormous happiness when the puck hit the back of the net,” said Zibanejad to Sveriges Television (SVT).

After a three decade wait – the impossible had finally happened.

“It is impossible to describe, it is a wonderful feeling,” said Zibanejad to SVT.