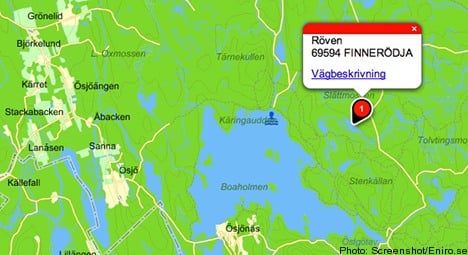 We will start close to the famous ski town of Mora in central Sweden, where there is a little place with a rather eye-catching name.

Perhaps it’s a description (let’s hope not), or maybe it was just named when the word had a completely different meaning, but for whatever reason, someone, at some point in time, found it appropriate to name this place Rövhålet, which literally translates to The Butthole.

When one starts to dig deeper, it turns out out Swedes have named plenty of places after that particular body part.

People outside Uppsala, for example, can take a stroll in the terrain of Djupröven (Deep Arse), and outside Gothenburg one can enjoy a swim in any of the Yellow, Small or Big Arse lakes (Gula Röven, Lilla Röven, Stora Röven).

A somewhat cuter name but still perhaps not the first pick to put on your resumé, is Kattsjärten in Värmland. The Local’s translation for this (hopefully) unusual name is Cat’s Bottom.

With this we’re leaving the behinds behind.

This may sound like something you would see in a tabloid headline after a Saturday night in the Big Brother house, but Sexträsk (Sex Swamp) is a place in northern Sweden, about 150 kilometers inland from Skellefteå.

And although Sweden is about as unprejudiced as countries come, many a driver in Sollentuna just north of Stockholm, have had to double take for decades as they pass a place called Bögs Gård (Gay’s Farm).

Sweden is also known for having many fresh water lakes, soothing bathers during hot summer days.

Although none of us here at The Local have ever been to these particular lakes we found we agreed that the names Köttsjön (Meat Lake) and Rumpsjön (Bottom Lake) didn’t create very inviting images.

Neither, in fact, did Pissholmen (Piss Islet).

Between Uppsala and Gävle in central Sweden, outside the town of Horsskog (which is one step away from claiming first place on this list for reasons we abstain from revealing) is an area that might be just a little stickier, a little nastier and a little smellier than other places. It is called Snormossen (Snot Bog).

Although, it has a contender in Varberg (Puss Mountain) in Halland County.

The following three aren’t actually that bad, read in Swedish. But English-speakers with some knowledge of Swedish pronunciation, or vice versa, can probably see what’s funny about Äs, Middelfart and Horred.

And perhaps it isn’t so surprising if people living in or near Fnaskberget (Trollop’s Mound) fail to write that as their permanent address on their resumé.

However, despite residents in some places every now and again revolt against names that they feel are less than fortunate, it would seem that most people are happy to live where they live, regardless of name.