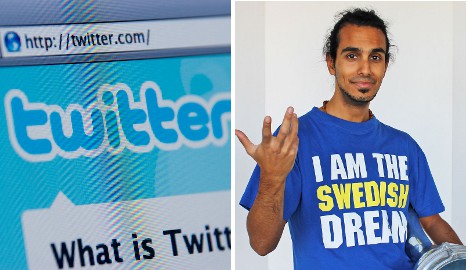 “I am overwhelmed by the interest people have shown over this and didn’t expect to get so much attention,” Gurgîn Bakircioglu told The Local.

Gurgîn Bakircioglu, a programme host at Sveriges Radio station SR Metropol, has been called a “phenomenon” after he introduced “#beskrivdittsexlivmedenfilmtitel” (literally “#describeyoursexlifewithamovietitle”) on microblogging site Twitter.

Despite the hashtag being in Swedish and therefore somewhat confusing to international users, it quickly became the highest trending topic on Twitter.

At one point, several hundred people per minute were posting tweets relating to the tag and started to join in the game of thinking up film titles to describe their sex lives.

“Gone in 60 seconds”, “No strings attached”, “Let the right one in” and “Love Actually” were some of the favourites.

However, Bakircioglu doesn’t want to take all the credit for the phenomenon.

“I saw a post online where a guy described his sex-life as being that similar to a film title, so it’s not strictly my invention. I just made it into a Swedish tweet with a hashtag and then it just expanded from there,” Bakircioglu told daily newspaper Dagens Nyheter (DN).

Part of the global appeal of the hashtag seems to have something to do with the fact that it was written in Swedish, prompting people across the world to wonder what the incomprehensible hashtag was all about.

“I have no idea why it caught on so fast but some American guy tweeted asking what it meant, saying all he could make out was the word ‘sex’,” Bakircioglu told The Local.

Due to their confusion, tweeters started talking about it and the trending topic followed on from there.

Bakircioglu thinks that Swedes in particular are good at making fun of sex, often a taboo topic in many other countries. This, he believes, is the reason why the game became so popular among Swedes in the first place.

“I just knew it would work in Swedish. Most Swedes are light-hearted and funny and can talk about their sex-life. Those are two very good attributes,” said Bakirciouglu to news website Ajour.

Of course, twitter trends die fast and Bakircioglu said that though his “invention” might have been the talk of cyber-space for a moment it will most likely be just as quickly forgotten.

“I used to make fun of trends instead of following them. Hashtags are shortlived. They’re like a high school romance. I’m glad conversations do not stagnate with hashtags but that we Swedes take them more seriously,” he told Ajour.

At the same time he hopes that humour might make the general public embrace Twitter on a larger scale.

“Twitter has become a duck-pond for journalists and politicians. I think it would be great if Twitter became a little more popular with people and I think that can be achieved with humour,” he told DN.

Bakircioglu, riding on the success of the film title initiative, soon after started a new game tagged #beskrivdittsexlivmedenlåttitel (#describeyoursexlifewithasongtitle).

Both topics are still going strong on Twitter with new tweets being posted constantly.