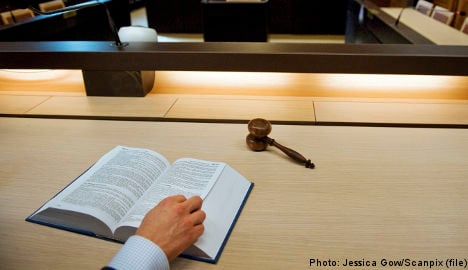 “Families often put a lot of pressures on these girls. They promise the world to them. Let’s just hope it is true this time,” said prosecutor Helena Treiberg Claesson to local paper Göteborgs-Posten (GP).

According to Treiberg Claesson, it is not uncommon that girls withdraw allegations against family members in cases such as this, but she stressed that it isn’t possible for them to drop the charges.

The 24-year-old man allegedly threatened to kill his sister, standing outside her door, while carrying a knife strapped to his body, in mid-December.

This was the climax of an extended period of threatening behaviour whereby the man had said over the phone that he was going to “do an honour-killing” of his sister, according to the woman’s previous statements.

The man was subsequently arrested and have been held by police for threatening behaviour and breaching Swedish weapons laws, since mid-December, according to the paper.

However, when the woman faced the court on Monday, she told a different story and said she wanted to withdraw her allegations against her brother.

The prosecutor’s other witness, a friend of the 21-year-old woman who was also in the flat when the man threatened to kill his sister, was also unavailable on the day of the trial, as she is currently not in the country.

The man was therefore released.

He is still under suspicion of the crime, but the court found it unreasonable to detain him any further as he has already spent several weeks in custody and there is no knowing when the trial can resume.

Treiberg Claesson said that she believed she had a strong case against the 24-year-old.

Apart from the statement from the friend, the man also sent a number of threatening text messages to his sister.

Treiberg Claesson is going to argue for a prison sentence for the man. To threaten someone is a serious offence, she said, and the penalty is generally a few months in jail.

“Someone who is being threatened can’t tell for sure if the person uttering the threats is going to act on it or not. When it comes to honour killings we know that there is a real risk that the threats will be acted upon. Many women have been killed. Let’s just hope it doesn’t happen to this girl,” Treiberg Claesson said to GP.

A new trial date will be set for the future, most likely for some time in the spring.