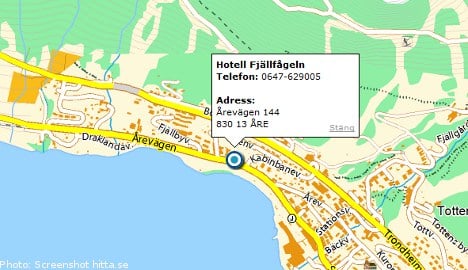 ”There is no such hotel in Åre,” said Lars-Börje Eriksson, CEO at Åre Destination, to local paper Östersundsposten (ÖP).

On the website, www.fjallfageln.se, which has since been shut down, the hotel looked very attractive to prospective tourists to central Sweden, with beautiful views of the spectacular scenery around lake Åre and reasonable prices.

According to the paper, the website was very well presented and the payments of the rooms were made through online payment service Payson.

An internet search for the hotel also came up with a travel blog praising the hotel.

This also disappeared shortly after the newspaper broke the story. It had first appeared on the internet in the beginning of December, close to when the hotel website was launched.

Searching for the hotel on the the Swedish directory and map website hitta.se, it shows up as located on Årevägen 144, but according to locals, there is no hotel at that location.

Eriksson told the paper that he has heard of previous incidents when non-existing flats were advertised to unsuspecting tourists.

”But this is the first time someone has been touting a fake hotel,” he said to ÖP.

The hotel was also marketed through www.hotellsverige.se, a site which has information and links to the booking pages of most of Sweden’s hotels.

After ÖP contacted the Hotell Sverige, they looked into the matter and removed the ad from their site. They say they were completely taken in by the scam.

”They emailed us info about their hotel. We rang them back and the guy bought the whole concept with pictures and links. They really are very crafty,” said Peter Fridén of Hotell Sverige to ÖP.

He was about to post the hotel their bill for the ad campaign.

”But it is probably not worth it,” he said to the paper.

The matter has been reported to the police but they have yet to decide whether to begin a preliminary investigation.