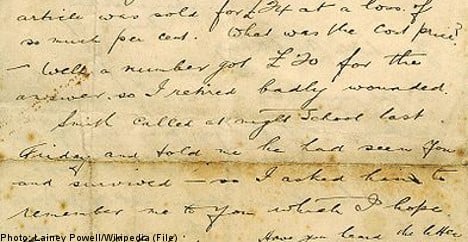 Stockholm resident Susann Bollö, 45, was taking a winter walk with her boyfriend Roger Bengtsson in a field outside of Morup in Halland when she chanced upon the folded, handwritten pages on the field’s edge.

“I cried out to Roger that the letter was from ’62,” she told local paper Hallands Nyheter.

But then on closer inspection, Bollö was surprised to find the letter was actually dated July 24, 1862.

“The fields were frosty so the pages were completely dry. It must have come in with the storm, ‘Emil’, the day before,” she told the paper.

“The letter was only a few metres from a water-filled ditch. It would have only taken a breath of wind to take it off into the water where it would have been destroyed.”

The letter, though a little smudged over time, is still quite legible despite the age and the old fashioned penmanship. It appears to have been sent from the Belgian coastal town of Ostend.

Bollö said the letter’s contents were a little difficult to read at first with the old styled Swedish characters, but that the abundance of the words ‘my beloved’ and ‘loving’ revealed the letter’s purpose.

It is also clear that the romantic writer was called Lina, and the object of her affection was named Otto.

It appears the romantic writer was well travelled too, as one passage reads “but my dear, one cannot compare Paris will London.”

The letter is signed off with “a heartfelt embrace… I love you” followed by a signature that is mostly still readable.

“Of course, it makes you wonder who Lina and Otto were,” Bollö told the paper.

“It would be really fun to find out.”