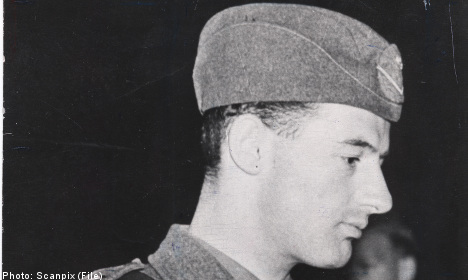 The Swedish diplomat hailed for rescuing tens of thousands of Hungarian Jews during World War II, went missing after his arrest by Soviet forces in Hungary on January 17, 1945.

Soviet and later Russian officials have claimed the Swede died in Soviet custody on July 17, 1947, but have never produced any proof.

Researchers insist he may well have lived past that date and have for more than 20 years been going through archives searching for clues to help solve the mystery.

Vadim Birstein and Susanne Berger, two researchers with the Swedish-Russian working group on Raoul Wallenberg, however told AFP Monday they had found a document in the Swedish foreign ministry archive confirming that the KGB had begun blocking the probe as early as the spring of 1991.

The document, they say, reveals that the director of the archive, Anatoly Prokopenko, officially told the Swedish embassy in Moscow in the fall of 1991 that the KGB had pressured him to block the work.

Birstein, one of two researchers initially allowed into the archives to carry out the probe for the Commission, told AFP he and others looking into the case had consistently been told important files did not exist, were not given access to crucial documents and the ones they were allowed to see were often heavily censored copies, sometimes with no more than a single sentence legible.

While he and other researchers have long lamented the stumbling blocks they faced and still face at the hands of the KGB’s Russia successor the FSB, the Russian-born US-based scientist said the Swedish foreign ministry document was of special interest because it showed Swedish officials had been informed of the practice and had silently accepted it.

“This means that later, when the second Swedish-Russian Commission started to work, the Swedish side had accepted the situation that there would be no independent access to the FSB and other sensitive archival materials,” Birstein said.

The lack of access meant that Birstein and Berger, a German researcher also based in the US, had only discovered in 2009 that Wallenberg had been held as “Prisoner 7” and had been interrogated six days after his official death date.

And after years of requesting investigative material on Wallenberg’s cell mate Willy Rödel, they say they discovered only a few months ago that large parts of his files still existed.

“We have consistently encountered problems in getting to the material that we truly need to see. We consistently face the problem of meaningful, direct, uncensored access to the records needed to conduct a serious investigation,” Berger told AFP.

If still alive, Wallenberg would be preparing to celebrate his 100th birthday in August, and Sweden was to kick off a year commemorating him on Tuesday, 67 years to the day after his arrest.

Berger says she hopes the focus on the Swedish diplomat this year will help put pressure on Russian officials to give broader access to the archives.

“Something has to change. If everyone says they want to solve the case, then certain actions should follow,” she insisted.