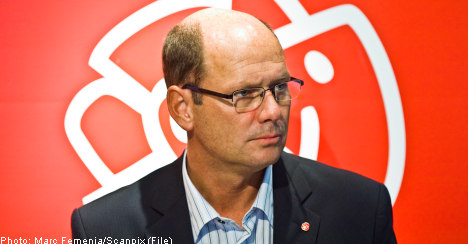 On Monday, Sveriges Television (SVT) reported that Juholt planned to name Ahlin as both group secretary in the Riksdag and deputy party secretary.

However, the Social Democratic Women in Sweden (S-kvinnor) were quick to express their displeasure over Juholt’s choice.

The frustration comes from sexual harassment allegations against Ahlin which came to light following the 2010 elections.

“As a representative of Social Democratic Women in Sweden, I would gladly see that we don’t appoint a deputy party secretary carrying around these sorts of problems,” Lena Sommestad, chair of the Social Democrat women’s group, told the Dagens Nyhter (DN) newspaper on Tuesday.

According to the allegations, first reported by Aftonbladet, Ahlin reportedly promised to promote a female colleague in exchange for sexual favours back in 2008.

He also allegedly knocked on the woman’s hotel room and asked to have sex with her during a trip to the United States and sent the colleague sexually-themed mobile phone text messages.

Ahlin has continually denied the allegations and the woman was later transferred to a different position within the party.

She has also refused to speak publicly about the accusations.

Despite the resurfacing of the allegations, Social Democrat MP Carina Hägg, who is also active in the party’s feminist organization, expressed her confidence in Ahlin.

“We’ve discussed a number of gender-equality related issues and I think it’s a shame that these old rumours keep coming up,” she told the TT news agency.

Juholt also defended Ahlin, pointing out that he had the confidence of former party head Mona Sahlin.

In the wake of the renewed debate about Ahlin’s qualifications, several prominent Social Democrat bloggers have expressed their sorrow over the state of the party and their weariness with Juholt’s constant missteps.

“I’ve supported Håkan Juholt until now but feel there is a limit at which point my patience runs out,” adding that the limit is fast approaching.

Despite complaints from the Social Democratic Women in Sweden, Ahlin was nevertheless appointed to be the party’s new Riksdag group secretary in a meeting on Tuesday afternoon, according to Expressen political reporter Niklas Svensson.