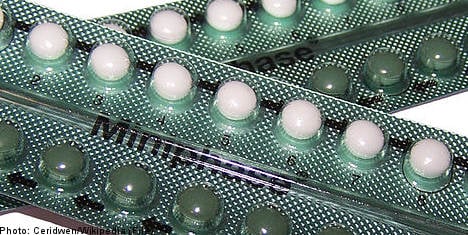 A new study published by researchers at the Sahlgrenska Academy at Gothenburg University has shown that combined oral contraceptives can help relieve the pains associated with menstrual cramps.

“I had such pain, I just couldn’t go on; it was ten days of hell,” Gothenburg resident Jessica Eriksson, who started taking birth control pills when she was 13-years-old, told the TT news agency.

“My mother took me to a youth health clinic and there was a huge difference after I got birth control pills.”

While many women have found that taking birth control pills containing both estrogen and progestrone hormones helped reduce the pain caused by menstrual cramps, previous studies haven’t been able to provide conclusive support for the pain-reduction power of the pill.

The woman provided information about their menstrual patterns, pains, and their use of oral contraceptives.

Five years later, researchers followed up with the women.

“We concluded that those who used combined oral contraceptives had a marked reduction in pain associated with menstruation. And when we put all the women together, the results became even more clear,” Ingela Lindh, a researcher at the Institute for Clinical Science at Sahlgrenska, told TT.

The study, “The effect of combined oral contraceptives and age on dysmenorrhoea: an epidemiological study”, was published in Human Reproduction, a leading European reproductive medicine journal.