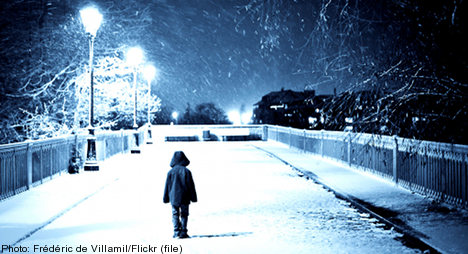 According to police reports, the father had stayed nearby and did indeed drive home together with his son on the Saturday evening of January 7th.

Conny Eriksson, a coach for the local adult floorball team Sirius, had claimed that he had found the boy alone in the freezing cold outside of Uppsala’s sporting hall, Fyrishov.

The child allegedly told Eriksson that his father had driven home without him, due to his bad performance in the game. The story sparked outrage in the press countrywide.

However, the investigation found that the 10-year-old had become upset as his team was losing and stormed off before the match was finished.

After the game, the father asked him to change into his regular clothes for the trip home, and the boy refused.

As the 10-year-old ran in an opposite direction, the father told him he would drive home alone, but never intended to actually leave him.

The father had reportedly asked a supervisor to watch the child as he went to pack up the car, which was parked behind the stadium. He claims he allowed the boy this time to “cool off” after the game.

However, the boy thinking himself alone, told Eriksson that his father had abandoned him and driven home to Stockholm (some 75 kilometres from Uppsala).

According to the report, the supervisor who was keeping an eye on the boy then took him around to the car where his father was waiting and the two made their way home.

The prosecutor has now chosen to close the case due to the fact that there is no longer reason to suspect a crime has been committed.