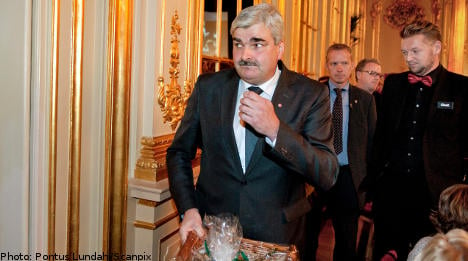 “We are about to hold our congress but I will go there asking the party for a continued mandate and support, and I think it will be me who heads the party in the 2014 election. But it will ultimately be decided by the party,” Juholt told news agency TT.

After recent months’ turbulence and repeated all time lows in the polls, there have been disgruntled voices calling for Juholt to step down.

“It would be strange if those opinions weren’t heard with public opinion looking the way it does today. It has gone up and it has gone down. Four months ago we were scoring 35 percent in the polls,” said Juholt.

Juholt also denied that a meeting with the party’s executive committee (Verkställande Utskottet – VU) scheduled for Thursday and Friday has anything to do with his position in the party.

“No, that has nothing to do with that. I feel a strong support from the party,” he claimed.

According to Sven-Erik Österberg, one of the members of the committee, the meeting was intended to plan the party’s policy strategies for the coming year but that it will now also be about other things.

“The committee members have a great responsibility for the party’s future and of course we must discuss the current situation. Everyone can see it has been messy,” he told TT.