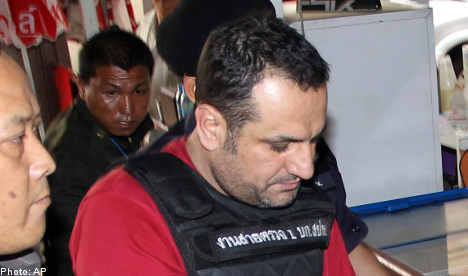 “I’m 100 percent innocent,” 47-year-old Hussein Atris told the Aftonbladet newspaper from a remand center in Thailand where he is being held on suspicion of possessing illegal bomb making materials.

Atris was arrested last Thursday at the Bangkok airport as he was about to board a flight back to his home in Lebanon.

While he was initially suspected of terrorism, Atris was later formally charged with illegal explosives possession after Thai police said they found large amounts of ammonium nitrate and fertilizer in a storage facility rented by Atris on the outskirts of Bangkok.

“A lot of the material police found in my storage facility had been placed there, most likely by the Israeli intelligence service Mossad,” Atris told the newspaper.

Atris said had been treated well by Thai authorities, but missed his family in Lebanon, where he has lived since moving back from Sweden in 2005 after a decade working as a hair dresser in Gothenburg.

He maintained he had nothing to do with the suspicions against him.

“This is a plot; I’m only involved in regular business activities,” he said.

Atris was arrested following warnings from the United States and Israel of possible terrorist attacks in the Thai capital.

According to Thai police, Atris has links to Hezbollah, an Iranian- and Syrian-backed Muslim Shiite group considered to be a terrorist organization by the United States.

Atris believes Mossad has singled him out because he is a Shiite Muslim who lives in an area outside of Beirut where support for Hezbollah is strong.

While he denies being a member of Hezbollah, he admits to having “left-leaning” sympathies.

“I voted for the Social Democrats when I lived in Sweden. That may have made me look suspicious in the eyes of the Mossad. They had an eye on me,” he told the newspaper.

Following his arrest, there was confusion about Atris’s nationality, but the Swedish foreign ministry confirmed earlier this week that Atris did have a Swedish passport. He told Aftonbladet he holds both Lebanese and Swedish citizenship and visited Sweden in 2010 to get a new Swedish passport containing biometric information.

Atris explained that, at the time of his arrest, he was in Thailand on business to check on how the storage facilities he had rented near the Thai capital had fared following flooding in the area in November and December.

“We bought goods in Asia and exported them to other countries, including Lebanon. It was fans, copy paper, ice packs used for pain relief,” Atris said, explaining the operations of an import-export business he started with a friend in Lebanon three years ago.

According to Thai police, the storage container contained bomb making material, including large quantities of ammonia and fertilizer.

“It’s as simple as that. We’ve never traded in fertilizer. It must have been placed in our storage facility by someone, probably the Mossad.”