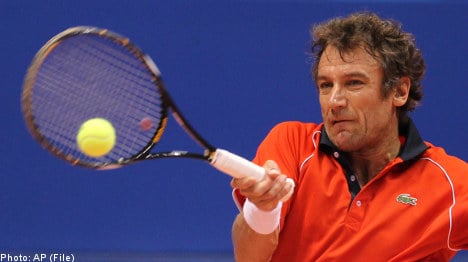 In a Facebook posting Wilander on Wheels (WOW), which runs tennis clinics, gave an update on the condition of the Swede, a commentator for Eurosport.

“To give everyone an update on Mats’ condition… Mats has been released from the hospital and is recovering at a hotel,” the message, posted on Thursday, said.

“In the end, Mats received a blood transfusion of three units of blood (a little less than a litre) and accepted the transfusion well! He is healing properly and hopes to be on his feet shortly for GAME SET MATS!

“He will not be playing tennis for at least one month. WOW’s schedule for the month of February will need to be postponed. WOW is hopeful to resume operations sometime in March…. Thanks for everyone’s concerns.”

Wilander was taken to hospital in Melbourne on the eve of the Australian Open after a fall in his apartment on Saturday in which he lacerated one of his kidneys, causing internal bleeding.

The Swedish former number one was in Melbourne to work as a television commentator for the Australian Open tournament.

Along with countryman Stefan Edberg, Wilander helped to ensure that Swedish players were a force to be reckoned with on the Grand Slam circuit after the retirement of tennis legend Björn Borg in 1983.