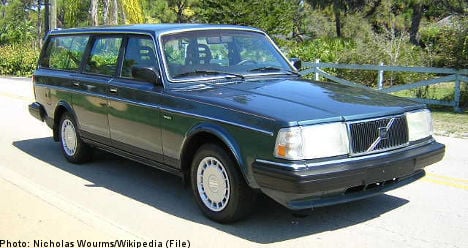 “Statistics show that Volvo cars feature about three times as often as Saab. This can be seen to reflect sales figures, but Volvo has also had the added bonus of bringing out spacious family cars with lots of safety features,” said Mattias Rabe, web editor at Swedish car magazine, Teknikens Värld.

While American and German brands dominate the top ten, Swedish car brands Volvo and Saab placed higher on the list than many more exclusive brands such as Ferrari, Lamborghini and Rolls Royce.

In terms of the importance of car make and model, Scandinavian head of Lovefilm, Ira Gladnikoff, explained that the choice of vehicle is often made with great care.

“On the one hand, it influences the character of the film; on the other, cars in the movies have become an increasingly important form of product placement for car companies,” she said.

Related gallery: The most popular cars on the silver screen

Volvo was 13th most popular make of car with 8,417 appearances — more than any other Swedish film star.

Dedicated Seinfeld fans may recognize the convertible Saab 900, which featured in several episodes as Jerry Seinfeld’s car of choice. The Volvo 940 can be seen, albeit in cartoon form, on episodes of The Simpsons.

Contrary to popular opinion, Saab, often synonymous with James Bond, never actually featured in the 007 films. In three of the John Gardner Bond novels, the spy drives a Saab 900, though none of these films was adapted to the film.

A remake of this Bond car, “The Silver Beast”, is currently being auctioned along with the rest of the classic cars from Saab’s museum, a move sparked by the company’s bankruptcy in December.

The auction ends on Friday.

The car makes which feature highest on the list are of American origin, with Ford and Chevrolet taking the top spots. Mercedes-Benz, Volkswagen, Renault, Toyota and Fiat fill out the middle, while Dodge, Peugeot, and Citroën round out the top ten.

The list was made with the help of the website imcdb.com (Internet movie car database), which has collected statistics of every single car appearance, both make and model, ever featured on the screen.