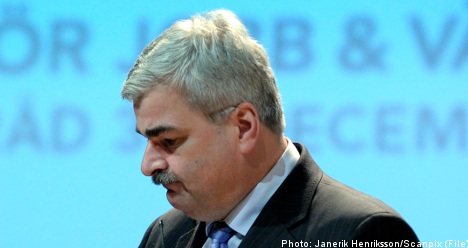 “I think it is Håkan’s decision and that it is a reasonable decision at that,” Malmö mayor and Social Democrat Ilmar Reepalu told Sveriges Radio (SR) on Saturday.

According to SR, everything points to Juholt resigning his leadership at a press conference he has called for on Saturday afternoon, in his home town Oskarshamn.

If Juholt does resign, Party Secretary Carin Jämtin is likely to take over the rudder until a new party head can be appointed, reports SR.

Another likely candidate mentioned in the press is Wanja Lundby-Wedin, leader of the Swedish Trade Union Confederation (Landsorganisationen, LO), according to daily Expressen.

On Saturday, Carin Jämtin’s press officer Odd Guteland told news agency TT that they are not commenting on the media reports.

Fredrik Kornebäck, the Social Democrat party press officer, wasn’t able to elaborate on what Juholt will say at the press briefing. But no other politician will attend, according to Kornebäck

He also said that the party hasn’t planned for any press activities in Stockholm today after Juholt’s briefing.

On Friday, after the executive committee had concluded its meeting, Jämtin held a brief press conference.

“Håkan Juholt will be continuing as party chairman,” she said at the time.

By then, Juholt had gone home to Oskarshamn and did not attend the press conference.

Earlier in the day, reports had emerged that three party districts – Örebro, Sörmland and Västmanland – had called for Juholt to step down.

Other districts expressed their support, while other refused to come down on one side or the other.

Reepalu believes that the executive committee has given Juholt the night to think through the situation and make a decision.

“I think they’ve left it for him to decide what he wants to do. I can’t see how he would have reached a different decision than acknowledging it isn’t working any more,” he said to TT.

“It is hard to see what other reason he would have to hold a press conference. Everyone is expecting him to resign,” Bjereld told TT.