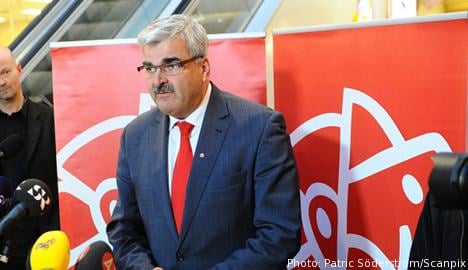 Juholt took the podium in a packed shopping centre in Oskarshamn and gave a short statement ending with the news that he is to stand aside.

“I am leaving my position as chairperson of the Social Democrats with immediate effect,” he said.

Håkan Juholt, who has had a turbulent time in his short period as leader of the party which was Sweden’s largest after the election last year, underlined that he had never applied for the job but had been offered it.

“From the first day I felt true support from Social Democrats across the country. The party needed a fresh start.”

“The fresh start didn’t pan out,” he admitted.

Juholt conceded that he “had made mistakes”, adding that the future would be the judge of his performance.

Håkan Juholt’s statement ends days of intense speculation, and months of uncertainty at the head of the party since irregularities emerged over his parliamentary rent subsidy last autumn.

According to media reports several districts had demanded his resignation and the announcement comes only a day after senior party figures insisted that he would remain in the post and retain the support of the party hierarchy.

At a press conference later on Saturday afternoon, Social Democrat party secretary Carin Jämtin said that she would “step in and help out” while a replacement for Juholt is sought, in what she called a “unique situation”.

“In an exceptional situation I will step in. But I am not acting party chairperson, I am still the party secretary,” she said to TT.

Jämtin also said she had spoken to all the districts over the course of the day and that there is great sadness countrywide over what has happened.

“Håkan Juholt has reached this decision by himself. The committee declared its continued support in him yesterday but he chose to announce that he leaves his post. Everyone feels sadness over this,” Jämtin said at the press conference.

“I respect his decision. Now we move on from there,” she told TT.