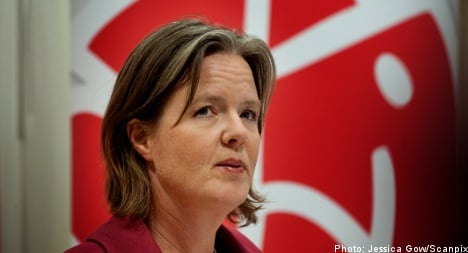 In the Sifo voter poll conducted during the last days of Juholt’s brief reign at the helm of the party, the Social Democrats polled 24.6 percent, the lowest level of support since Sifo records began in 1967.

According to the poll, published in several leading dailies on Sunday, the Left Party is the main beneficiary of the Social Democrats’ enduring crisis.

The Left, a party formed by a splinter group from the Social Democrats back in 1917, polled their highest result since 2004 with 8.8 percent. New leader Jonas Sjöstedt is given some credit by experts for the 2.5 percentage point rise.

Sjöstedt and the Left Party have managed to attract some 100,000 voters from the Social Democrats since the change of leadership on January 7th. A further 40,000 are reported to have come from the Green Party.

The changes among the Alliance parties are small while the Sweden Democrats advanced from 5.2 percent to 6.9 percent.

After Håkan Juholt’s decision to resign was announced on Saturday afternoon speculation immediately began as to his likely replacement.

Former EU commissioner Margot Wahlström and former justice minister Thomas Bodström remain popular alternatives, but neither are considered likely to put themselves forward for the job.

Senior party figures Pär Nuder and Leif Pagrotsky have been discussed in some quarters but are also deemed unlikely to want the job.

An outside candidate for the post and one who featured in discussions after the demise of former leader Mona Sahlin, is Veronica Palm, who is considered to represent the left wing of the party.