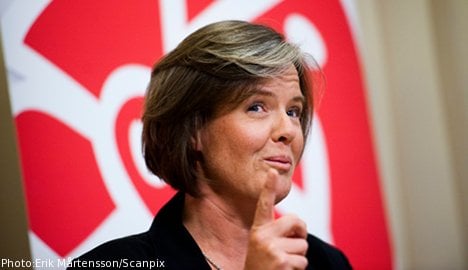 “We will have an answer some time over the course of Monday,” acting party chairperson Carin Jämtin told news agency TT.

She said that the executive committee has agreed to a more open process when choosing their party leader this time around. However, according to Jämtin, no names have been on the table yet.

“It is matters of form that we have been discussing so far,” said Jämtin after the meeting had been called to recess.

On Monday morning she reiterated to Sveriges Radio (SR) that the committee is reviewing the process at the moment and not evaluating candidates.

“We haven’t landed yet, but everyone on the committee feels and understands that this is a unique situation. We are at this point now, and we must be able to handle that. But there are no manuals as to how to move forward,” she told SR.

However, there is much speculation in the press as to who could be in question for the post.

Candidates whose names are mentioned this time, just as they were before Juholt’s election, are Mikael Damberg, party veteran Pär Nuder and Sven-Erik Österberg.

However, Österberg, Löfven, Palm, Jämtin and Nuder have reportedly already said that they will not run.

When the committee will turn to reviewing possible new party leaders, Jämtin is not anticipating any problems finding a suitable candidate for the post.

“The important part is finding a person that the whole party can support. I think that is fully possible,” she told SR.

It is now up to Lars Engqvist, former minister in the Göran Persson government, to lead the development of a new Social Democrat party programme for the congress in April 2013.

He does not think that the turbulence and the resignation of Håkan Juholt will affect that work.

“That we change our leader should not affect this. Among the Social Democrats the revision of party policies take place on a broad scale,” he told daily Svenska Dagbladet.

“It is the members to decide and the congress to vote on. It has never been connected to the party head,” he said.

Former Social Democrat head, Håkan Juholt, confirmed to local paper Östran that the decision to leave was his own and that no one in the executive committee had demanded his resignation.

However, he also said that that social democracy deserves a leader who can win the general public over and that this leader clearly wasn’t him.