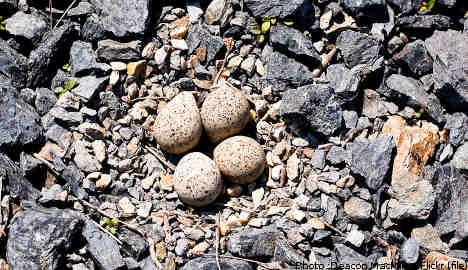 “I don’t know why the report ended up here. The suspect lives in southern Sweden,” said Stefan Sundberg of the Sundsvall police to the local Dagbladet newspaper.

However, Sundsvall police have begun investigations into the plundering, which allegedly took place widely around Sweden between 2007 and 2010.

They are investigating a potential link to a 45-year-old bird fancier from Härnösand, 50 kilometers north-west of Sundsvall, who was arrested for being in possession of over 1,000 species of bird last year, including a rare eagle-owl and other birds of prey.

The British Interpol reportedly came across the case after ramping up their investigations into the illegal trade in endangered species.

According to the paper, the suspect is in violation of Sweden’s protected species laws, and has allegedly amassed an extensive collection of rare eggs already, which are yet to be classified.

“Some of the eggs must have been especially rare and protection-worthy,” said Sundberg.

In October last year, another Swedish bird enthusiast who had caught more than 13,000 wild birds was sentenced to 18 months in prison for aggravated hunting crimes, animal cruelty, and violating Sweden’s protected species laws.

All wild birds are protected in Sweden and it is against the law to collect their eggs or nests.