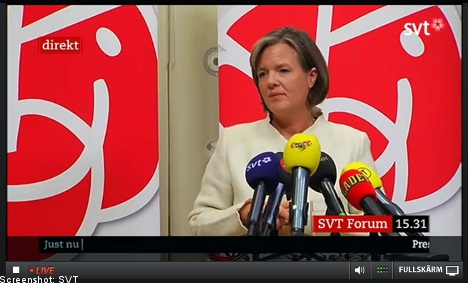 During a press conference on Monday afternoon, Jämtin said that a decision on how the leadership selection process would be carried out will be announced on Friday, after she has spoken to all the party’s districts.

“We’ve decided that the process going forward will end with a decision that will be taken by the party’s governing board on Friday. This is a unique situation,” Jämtin told reporters at the conclusion of another meeting of the Social Democrats executive committee (verkställande utskottet – VU).

Jämtin explained that the committee would meet again on Tuesday evening, and perhaps on more occasions later in the week, but that a decision would be taken Friday by the party’s governing board.

According to Jämtin, the commitee wants to get an idea of the party districts’ views on whether to choose an acting party leader to take over the party until next year’s congress, or to call an extraordinary general meeting and choose a new leader straight away.

“Those conversations have already started today. But it’s going to take a while,” she said.

“The most important thing for us is not to get stressed and rush in. We have to get this right.”

Jämtin refused to go into whether or not the names of any potential party leaders would be proposed during Friday’s meeting.

Meanwhile, speculation continues surrounding who is most likely to success Juholt, who announced he was stepping down on Saturday after less than a year at the helm.

Candidates whose names are mentioned this time, just as they were before Juholt’s election, are Mikael Damberg, party veteran Pär Nuder and Sven-Erik Österberg.

While most members of the executive committee have been tight-lipped about whether or not any specific names have been discussed, Österberg told the TT news agency that such discussions had in fact taken place.

“Of course we’re discussing candidates. It’s about finding a name that the party can rally around and make it strong again,” he said.

“I think all committee members have considered names since Håkan Juholt delivered his message on Saturday.”

Österberg added that he was “very doubtful” about taking over as leader.

OPINION & ANALYSIS
Are Sweden’s Social Democrats ready to go as far as Denmark’s?