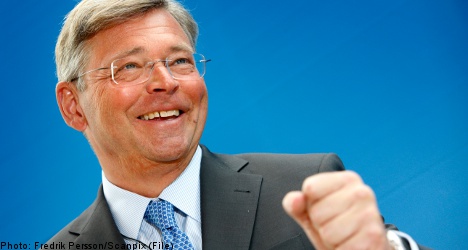 The fourth quarter net profit figure was stronger than expected, as analysts had forecast a profit of 695 million, according to Dow Jones Newswires.

The bank’s operating profit for the full year slid by three percent to €3.54 billion, and slipped by four percent in the fourth quarter to 1.02 billion.

Nordea’s share price opened up by 1.14 percent on a Stockholm exchange down by 0.63 percent.

The bank said it had “no direct exposure” to the current eurocrisis.

“However, as all banks, we are indirectly affected by volatile markets and regulatory changes.”

For the full year, net loan losses shrank by 16 percent to 735 million euros.

Nordea, which has some 34,000 employees, announced in August that it would slash 2,000 jobs across the Nordic region by the end of 2012 to counter the effects of rising costs.

So far, the number of employees has been reduced by around 1,100, it said.

The bank said its short term cost-cutting targets have been met.

It said it was maintaining its target “to reach a return on equity of 15 percent in a normalized economy with higher interest rates and capital requirements of 11 percent.”

Swedish authorities have set the core tier 1 capital requirements to at least 12 percent from 2015.

“The Swedish capital requirements differ from (the bank’s) assumptions, but before the European levels are known and the funding and liquidity regulation is finalized, it is difficult to foresee the full effect of this deviation.”

The bank said it was concerned “not only about the risks of unfair competition from unequal regulation, but even more so about the effects on investments, growth and new jobs.”