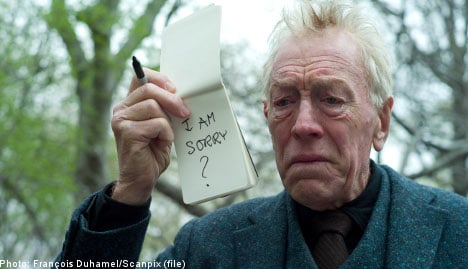 Von Sydow received the best supporting actor nomination for his role as the mute ‘renter’ in “Extremely Loud and Incredibly Close”, directed by Stephen Daldry and based on the book of the same name by Jonathan Safran Foer.

In his bid to become the oldest Oscar winner ever, von Sydow faces fellow elderly heavyweight Christopher Plummer, also 82, for his role in “Beginners”.

Plummer was nominated in 2010 for the first time in his illustrious career for his portrayal of Tolstoy in “The Last Station”, and will be looking to take home his first statue.

Another major threat that cannot be ignored is veteran actor Kenneth Branagh, 52, who is nominated for his role in “My Week with Marilyn”.

Rounding out the nominations for the 2012 Academy Award for Best Actor in a Support Role are veteran actor Nick Nolte, 70, for the film “Warrior” and Jonah Hill, 28, for “Moneyball”.

Von Sydow, a native of Lund in southern Sweden, turns 83 in April, which would make him the oldest actor in history to take home the Oscar in the category.

Previously, von Sydow was nominated for best actor in in the Danish film “Pelle the Conqueror” in 1987, losing out to Michael Douglas in Wall Street.

He also starred in a number of films by legendary Swdedish director Ingmar Bergman, several of which took home Academy Awards.

And Rooney Mara was nominated for her portrayal of Sweden’s newest film icon ‘Lisbeth Salander’ in the American remake of “The Girl with the Dragon Tattoo”.