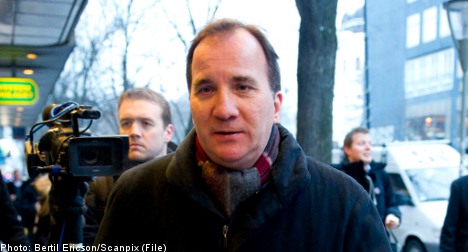 Plans call for Löfven, who has led the union since 2006, to serve as the chair of the Social Democrats until the party’s next congress, scheduled for 2013, the local Västerbotten Folkblad newspaper reports, citing anonymous sources.

“I’m not going to comment on anything,” Löfven told the Expressen newspaper late Wednesday night following another meeting of the party’s executive committee (verkställande utskottet – VU).

However, Löfven’s mother Iris Melander confirmed the news that her son had been proposed as the next head of the Social Democrats with the local Örnsköldsviks Allehanda newspaper.

“He called yesterday and told me, but at the same time said that it should be kept secret until Friday,” she told the newspaper.

According to Melander, her son likely has what it takes for the job, but she refused to get into specifics when asked about Löfven’s chances for success.

“It’s hard to say. He certainly has the head for it, but we’ll just have to see how it goes,” she said.

While Löfven is set to take over as chair of the Social Democrats, MP Sven-Erik Österberg will take over as the party’s Riksdag group leader, while Carin Jämtin will remain as party secretary, according to the TT news agency.

The question of who will take over as the party’s economic policy spokesperson remains to be decided, however.

While Löfven is set to be named Social Democrat chair, he and and Österberg will constitute something of a leadership duo for the party, according to Sveriges Television (SVT).

Speaking on SVT on Thursday morning, former prime minister and Social Democrat leader Göran Persson said he knew that the party’s next leader would be a man and that he felt “very secure” about the choice.

At a Wednesday evening press conference, Jämtin told reporters that the Social Democrats’ governing board (partyistyrelsen) would on Friday appoint a new party head to take over from Håkan Juholt, who resigned from the post last weekend.

According to Jämtin, the party was more or less in agreement that it wanted the appointment of a new leader to take place quickly and that a number of names had been discussed.

“It will be one person, but not me, that much I can reveal,” she told reporters on Wednesday.

Both Expressen and Sweden’s TV4 reported that the Social Democrats’ executive committee, of which Löfven is a member, had discussed the labour boss as a possible candidate for party chair.

Earlier in the week, Löfven had repeatedly denied that he was interested in the job.

“I’m not a candidate for any party leadership post,” he told Svenska Dagbladet (SvD) on Monday.

Löfven was born in 1957 in Stockholm and has chaired IF Metall since the unions 2006 founding through a merger of the Swedish Industrial Union (Industrifacket) and the Swedish Metalworkers’ Union (Metall).

The news comes amid another set of dismal poll numbers for the Social Democrats.

According to the latest TV4/Novus survey, support for the party stands at 22.9 percent, down 3.3 percent since December 2011.

Disgruntled Social Democrat supporters appear to be fleeing primarily to the Left Party and the Green Party, according to the poll.

Meanwhile, support for the Moderates has climbed 0.8 percent to 35.6 percent.