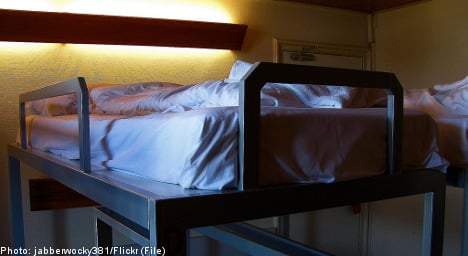 The employee at the Vildmarks Hotel at the Kolmården zoo outside of Nörrköping was found lodged behind a wall-mounted bunk bed, prompting a 5am call to emergency services to help free the man, the local Norrköpings tidningar newspaper reported.

“The person’s head was trapped by the top bunk, while the rest of the body had fallen off the bed,” Lennart Månsson of the Östra Götaland rescue services, told the newspaper.

When they arrived, rescue workers were forced to remove the bed from the wall in order to free the employee, who had been trapped for at least a half an hour.

While the exact cause of the incident was initially unclear, a manager at the hotel told the Expressen newspaper later on Wednesday that the employee became stuck in the bed due to a failed practical joke following a kick-off party for staff.

“We had a company-wide conference and a group of young men were sharing a room. Pushing really hard, three of the men managed to force up the bed where one of their colleagues was laying,” Per Keller told the newspaper.

“It was totally misguided…They were joking around and got it in their heads to do this.”

Due to the force applied by the man’s co-workers, the bed became damaged, leaving their hapless colleague trapped.

After being freed, the man was transported to a nearby hospital for further observation due to injuries to his throat and neck.

Keller told Expressen that the company is reviewing the accident and that the men who carried out the failed prank “feel pretty bad” about the incident.