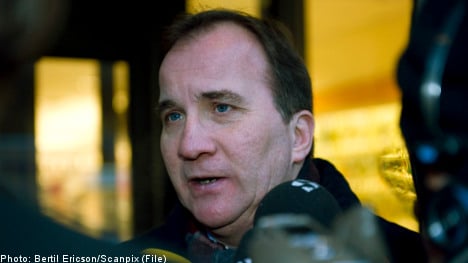 As far back as November 2010, when the Social Democrats were struggling to come to grips with their worst election defeat in decades, party heavyweight Björn von Sydow, a former defence minister and speaker of the Swedish parliament and high-ranking party, suggested IF Metall head Stefan Löfven as an ideal candidate to lead the party after then leader Mona Sahlin announced she was stepping down.

“He leads IF Metall in a modern way. He can modernize and develop the cooperation between the party and the union,” von Sydow said at the time.

Although Löfven said he didn’t want to lead the part, and repeated his stance earlier this week, his name has nevertheless been among those batted about as a potential party leader both when Håkan Juholt was chosen last spring, and in the wake of Juholts departure last weekend.

And now, if Löfven’s mother is to be believed, he appears poised to take over the reigns of a party which finds itself struggling to redefine itself in hopes of regaining power in the 2014 parliamentary elections after what will have been eight years in opposition.

Born on July 21st, 1957 in Stockholm, where he now lives, Löfven first worked as a welder at defence firm Hägglunds in Örnsköldsvik in northeastern Sweden.

Little did he know when he became the union representative there, that it would be the start of a long career within trade unions and politics.

In 2001, Löfven was elected deputy chair of the Swedish Metalworkers’ Union (Metall) after having served as the union’s ombudsman since 1995.

Five years later, in 2006, he became chair of IF Metall, a new union formed through a merger of the Metalworkers’ Union and the Swedish Industrial Union (Industrifacket).

In 2006, he was also elected onto the Social Democrats’ executive committee.

In is current role he leads a 370,000 member-strong organization.

In addition to this role with IF Metall, Löfven also sits on board of directors of Sweden’s Trade Union Confederation (Landsorganisationen – LO).

According to von Sydow, Löfven’s approach to modernizing the trade union was more important than the fact that the IF Metall head hadn’t been elected to the Riksdag, a traditional requirement for any party leader.

“He sits in the party’s executive committee and they are a big part of the party. What’s important now is contact with the media and in order to manage those contacts you don’t need to be in the Riksdag,” von Sydow explained.

Assuming Löfven is officially unveiled as the party’s new chair as expected on Friday, it will mark the first time a new Social Democrat party head has been chosen from among the top ranks of the Trade Union Confederation.

According to many political commentators, Löfven represents good choice for the leadership role as he isn’t tied to either of two factions which have been in a struggle to pull the party toward the left or the middle.

“As well as having the abilities demand by the party, he was one of the few names that everyone could agree on,” said Dagens Nyheter (DN) political analyst Maria Croft.

“As chairman of the union, Löfven has his long experience in managing a large organization and he is also used to speaking in the media, even if the pressure does not come close to that experienced by the Social Democrats leader.”

He is also Chairman of the Industrial Workers of the Nordic countries, and a member of the Trade Council Board of Directors, the International Metalworkers Federation and the Royal Institute of Technology’s Board of Directors.

There will however likely be some opposition to the candidacy, not least from within Trade Union Confederation.

The group’s largest union, municipal employees’ union Kommunal, has been critical in the past of Löfven’s apparent unwillingness to press for pay equality for low-paid female workers during wage demand negotiations, according to the TT news agency.

A keen fan of the Örnsköldsvik-based Modo ice hockey team, Löfven likes to spend as much time as he can at his summer house near his childhood home and has often spoken of his passion for music, the theatre, cinema and reading.