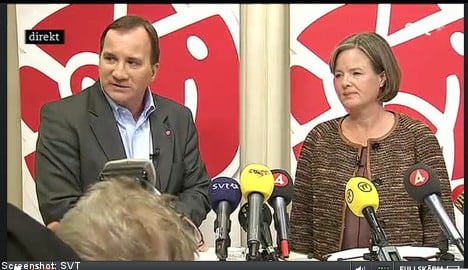 “We plan to propose that the party’s governing board choose Stefan Löfven to be the new party chair,” party secretary Carin Jämtin told reporters.

“I’m very proud and happy about it.”

She explained that the party’s executive committee came to its decision after concluding that having a social democratic heart and leadership skills were of primary importance.

“We are in a rush and we need a talented and competent party leader. The reason is simple: we have to start building up (voters’) trust in the party and staking out our policies now,” said Jämtin.

“It can’t wait, not when opinion poll numbers are so low and the next election (in 2014) is approaching ever faster.”

The 55-year-old union leader, who has never before held elected political office, said he was ready to take the Social Democrats forward.

“When I look out at Sweden today I see that we need significantly more social democratic policies,” he told reporters.

“I’m very proud and happy to be the executive committee’s candidate for the job of party chair. For me, it’s also important that our party continue working together.”

He described as a “strong team”, the group of people who will now take over leadership of the party and help push the Social Democrats into the future.

“I’m very happy, thankful, and relieved that Stefan Löfven is ready to shoulder the responsibility for the party at a difficult time for us social democrats,” Juholt told TT in a text message.

According to Juholt, Löfven is a “strong representative for social democracy’s highly successful model built on grown and solidarity”.

“It’s important that the new party chair now get the support and confidence he needs to successfully uphold the ideas and policies of social democracy and to lead us back to power in government by the 2014 election at the latest,” said Juholt.

Other party stalwarts were also quick to praise the choice of Löfven.

“I know him; he’s stable, he has sound judgment, and I think he’s the right name for renewing the Social Democrats.”

Pagrotsky added, however, that it was difficult to convince Löfven to take the job.

“Stefan Löfven isn’t only an experienced and courageous union leader. He has broad political competence. I’m convinced that with him leading the way, social democracy is going to play an increasingly important political role in Sweden and even in Europe and the rest of the world.”

While Löfven has been presented as the executive committee’s nomination to be party leader, he won’t officially take over as the head of the Social Democrats until his nomination is approved by the party’s governing board, which is expected to meet on Friday to approve the nomination.

The once-dominant party has seen its popularity fall to record lows below 30 percent in recent polls, after more than five years in opposition where it has struggled to make an impact on voters.

Prime Minister Fredrik Reinfeldt, who heads a centre-right coalition government, has meanwhile succeeded in shifting his conservative Moderate Party towards the middle, taking over some of the traditional Social Democratic rhetoric — and its voters.

Reinfeldt campaigned successfully in 2006 on his Moderates being the “new” workers’ party as he aimed to get Swedes’ back to work amid high numbers of people living off benefits in a cradle-to-grave welfare state created by the Social Democrats.

A recent editorial in Sweden’s paper of reference Dagens Nyheter said: “We are witnessing the end of the (Social Democratic) party’s hegemonic power.”

The party’s “influence has been more than just the governmental power. The party has decided how we think.”

But in recent years “the Social Democratic welfare ideology (that has characterised Sweden for so long) has been rolled back in favour of privatizations, individualism, EU membership and globalisation,” it said, questioning whether the party would be able to successfully renew itself.

Reinfeldt won re-election in 2010, while the Social Democrats turned in their worst election results in nearly a century.