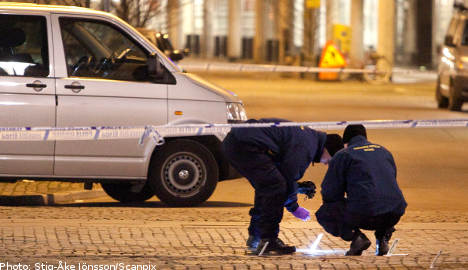 All three men are known to have criminal ties.

According to Marie Keismar, officer on duty with the Skåne police, it’s still too early to say whether the shooting has any connection with other, unresolved, shootings and violent acts that have rattled Malmö recently.

It’s also unclear what caused the shooting, which occurred near the intersection of Södergatan and Baltzargatan.

“We know very little about what’s happened. I also don’t know whether the crime will be classified as attempted murder, attempted manslaughter, or aggravated assault,” said Keismar to news agency TT.

Because of a party at night club Slagthuset, several police officers were already in the area when the shooting occurred at 3.30am.

“We were able to run over to the suspect and arrest him,” explained Keismar.

She was unwilling to comment on whether a weapon had been found, or what type of weapon the suspect may have used.

On Saturday morning, police investigators were working to scour both the crime scene and the suspect’s escape route, hoping to find some evidence.

The suspect was interrogated on Saturday morning, but police have not revealed whether he’s made any confessions.

Keismar wouldn’t comment on what type of criminal ties the two wounded men and the suspect have.