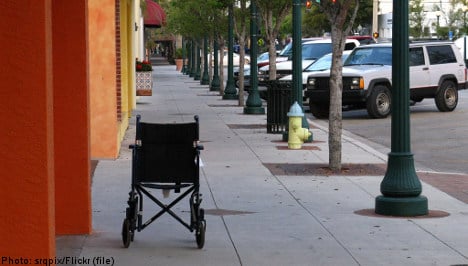 “We are labelling this as robbery,” said Ulf Lörstad, spokesman of Vara county to the Göteborgsposten (GP) newspaper.

The thieves were shopping in a Willy’s low price supermarket in Vara, north-east of Gothenburg, on Sunday evening, when staff noticed they were using their chairs to conceal groceries.

The staff confronted the men, who subsequently got to their feet and ran, leaving one of the wheelchairs behind.

A closer inspection of the chair revealed a secret compartment, which contained a carton of coffee packages. It is unclear whether the thieves escaped with more.

The robbers, both believed to be in their 30s, fled before the police arrived, yet authorities remain confident that enough evidence has been left behind to help bring the men in.

“We’ll be making a forensic investigation of the wheelchair. Hopefully there will be traces, and if the men are in our register, then it will be hard for them to deny this crime,” Lörstad told the paper.

Meanwhile, evidence collection at the scene of the crime wasn’t an open and shut case either.

“The wheelchair didn’t fit into our response car, so the youngest member of our force was given the task of wheeling it back to the station,” Lörstad told GP.