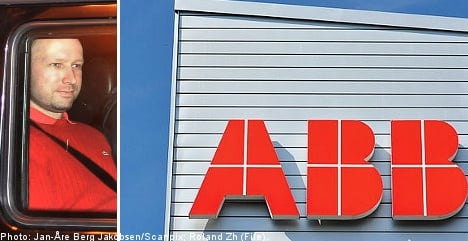 Within hours of the dual July 22nd attacks that left 77 dead in Norway, newspapers and users of social media began using the initials to refer to the confessed Norwegian perpetrator, whose full name was considered ill-suited to headlines and Twitter messages.

“It’s aggravating when daily newspapers use ABB to describe the terrorist, and it is our opinion that they should be more aware of this,” said ABB spokeswoman Helene Gunther Merg.

“Despite this, we decided to let it go. It would have been impossible to limit the use of the abbreviation on social media.”

Branding experts consulted by the newspaper said the company had little to worry about in terms of its reputation.

“Since ABB is not a firm that targets normal consumers this is unlikely to have a major effect for them,” said Håvard Hansen, professor of marketing at the Universtity of Stavanger.

ABB is not the only firm to have sought to sever any perceived links to Breivik. In September, French clothing firm Lacoste voiced its exasperation at images used by the media of Breivik wearing sweaters that bear the fashion house’s familiar crocodile logo.

Norwegian police informed newspaper Dagbladet at the time that the company had been in touch with them to ask whether they could get the right-wing extremist to wear different clothes.