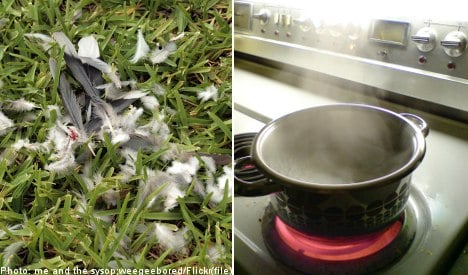 “This is sick and barbaric,” said the owner, who wished to remain anonymous, to local newspaper Jnytt.

The bird coop, in the town of Råslätt, outside Jönköping in central Sweden, had been brutally broken into with a crowbar, and the pigeons had been taken out, slaughtered and eaten on site.

“It feels horrible. There was blood and feathers everywhere,” the woman told the paper.

Police have not yet made any arrests, yet it seems clear that the birds were decapitated, de-feathered, and ingested in a recreational kitchen that adjoins the pigeon coop.

Left behind were the birds’ heads, claws, feathers, bones, blood and guts, as well as the unwashed saucepans, cutlery and a plate.

Police photographs show floors stained by blood from the unfortunate avian victims and the fridge in the kitchen littered with pigeon remains; wings, feathers and blood splattered about.

The investigation also points to the pigeons being boiled before they were eaten.

According to the paper, the coop owner is still in shock and has not seen anything remotely similar in the 15 years she has owned the facility.

Jönköping police have taken DNA samples from the used plate, and are labelling the crime as theft and vandalism.

The birds themselves were not ordinary pigeons, but rather specially bred homing pigeons that had been used in competition and can cost upwards of 1,000 kronor ($150) each.

According to the paper, the thief killed at least 12 birds, and took several more to go.

Police are interested in hearing any information from the general public that could lead to finding those responsible for the crime, or to the discovery of the remaining birds believed to have been abducted by the intruder.