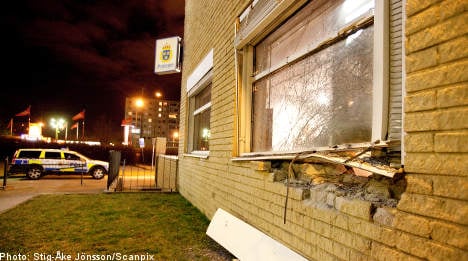 Two men dressed in dark clothing were seen placing what is believed to be a bomb outside the building before fleeing the scene.

The blast, which took place around 2.30am, left a hole in the police station’s brick wall and caused extensive damage to the offices inside.

Police say there are a number of witnesses to the incident, but Keimar was unable to elaborate on what witnesses may have said about what they saw.

However, eye witness Tomas Holmqvist told Svergies Television (SVT) that he had seen two men dressed in black place the charge outside the station.

The two men then fled the scene on a black scooter.

The police station singled out in the attack is located on Eriksfältsgatan in central Malmö.

According to police, there were people present in the station shortly before the explosion occurred.

“It was lucky there wasn’t anyone in there, but it was still a serious attack against us,” said Keimar.

“It’s unclear how seriously the building was damaged or if there is any risk that it might collapse.”

By 4am, investigators had begun examining the scene in order to assess the damage.

The police station is located in Malmö’s Fosie neighbourhood, the same area where a man was fatally shot just hours before.

Shortly before 7pm, police found a 48-year-old father of four shot in a car. He was rushed to hospital but later died from his injuries.