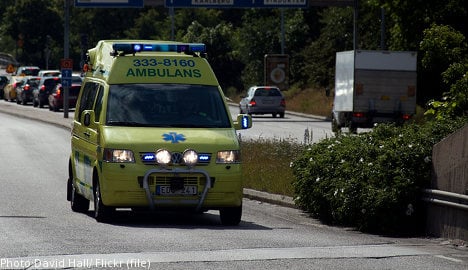 The incident took place on 2am on New Year’s morning when the woman’s 53-year-old boyfriend was struck by a cerebral hemorrhage at their home in Blekinge in southern Sweden.

She immediately called 112, the Swedish emergency number, but was unable to get an operator on the line.

“I tried repeatedly to call SOS via 112, but without success. No answer!”, the woman wrote in her complaint to the National Board of Health and Welfare (Socialstyrelsen).

“To not be able to reach SOS Alarm is totally unacceptable!”

According to the woman, she placed several calls using both a mobile phone and a land line.

She had even called a friend and begged her to call as well.

But neither the woman nor her friend were able to get emergency services on the line.

“According to their contract with the state, it’s not supposed to take longer than eight seconds to get an answer from SOS Alarm,” the woman wrote.

In her complaint, the woman explained that “a while later” she received a call from emergency services and that an ambulance eventually arrived at their home.

But it was too late to save her boyfriend’s life.

The woman claimed that the fact calls were place from both a land line and a mobile phone ruled out the possibility that there was something wrong with the telephone connection.

Nor should the fact that it was a holiday have made any difference, according to the woman.

“New Year’s night or not, it shouldn’t make any difference when every second is critical,” she wrote.