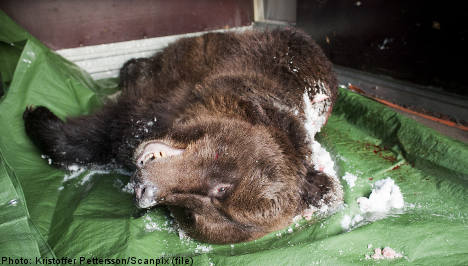 “It was as bloody as a slaughterhouse,” the man’s brother, arriving first on the scene, told the Aftonbladet paper.

Per Hedberg, 55, had been hunting with his brother in Bollnäs, eastern Sweden, when the bear awoke from hibernation and attacked him.

The hunter managed to free himself from the jaws of the bear with a shot, wounding the animal, and then made a mobile phone call to his brother Tommy who was nearby, according to newspaper.

Tommy had already heard the shot from afar when he received the call.

“I’ve been bitten by a bear. Now I’m dying,” Per said to his brother.

Tommy rushed to the scene with the help of his tracker dog, and found his brother lying wounded in the snow.

“He was badly bitten in the head,” Tommy said.

Per had also managed to make a call to his girlfriend a few minutes after the incident and shared the grisly details of the attack.

“I was shocked when he said I should sit down. Then he explained about the bear attack and that he was badly injured. The bear had chewed on his head and refused to let go,” she told Aftonbladet.

On Tuesday, Per awoke at a hospital in Gävle after a nine-hour operation. His head and neck were badly damaged, as well as one hand which he used to protect his neck against the bear.

Police gave orders for the bear to be tracked and killed, and the municipality’s specialist hunter with the help of local hunting teams succeeded to fell him on Sunday.

The bear was an adult male who weighed in around 200 kilogrammes.

It is believed that the hunter’s dog had woken the bear from hibernation, prompting the animal’s attack.