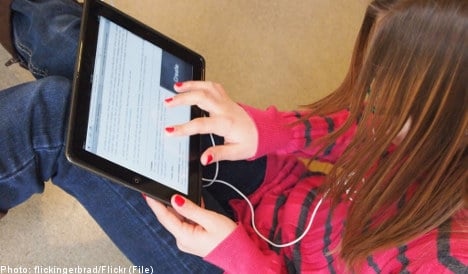 Maria Stockhaus, chair of Sollentuna’s children and education board, argued that schools in her municipality are in the ‘backwater’ compared to the rest of society, and that the time has come for three schools in particular to embrace the future.

“The schools will take a step into the now instead of staying in the old days. Computers are as natural in schools as paper and pens, yet the fact that only every other teacher in Sweden has a computer today is completely insane,” she told Dagens Nyheter (DN) newspaper.

“Even in the future people will need to read and write. You can’t always have access to a computer in some places,” he told DN.

“Books have an obvious place in school, and national exams are still written by hand. I predict that they will not follow through with their proposals.”

The Sollentuna municipality has already issued computers to all teachers, and plans to giver every student from 2nd grade and upwards their own touch screen tablet computer.

Stockhaus said that the students will not be given paper and pens at all until they are 8 years of age, by which time they will have already had time to acquaint themselves with the touch screen technology.

This, she argued, will set the students up more suitably for the future.

The benefits of assigning individual computers to students are clear, if only in terms of levelling the playing field for families with differing incomes.

“We know that not every student has computer access at home. These students who come from homes with tighter finances have worse grades. An even greater wedge will occur if they do not get the same digital competence as the others,” Stockhaus said.

On top of this, she claimed that the feedback is immediate on a computer, and the students can learn much faster, with less supervision.

The digital upgrade couldn’t come soon enough, according to Stockhaus.

Tegelhagsskolan, another school nearby, already has had complete PC access for three years and its students have consistently excelled.

A portion of the costs will be paid by the abolition of textbooks and the switching to digital learning materials.