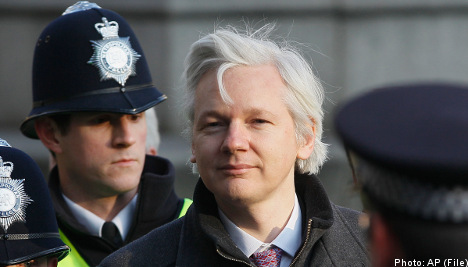 The 40-year-old Australian’s lawyers told the Supreme Court in London that the Swedish prosecutor who issued the European Arrest Warrant in December 2010 was not a proper judicial authority.

“This appeal involves a single issue of law which can be very simply stated. The question is whether a Swedish prosecutor has judicial authority for the purposes of the extradition act,” Assange’s lawyer Dinah Rose told the court.

Rose said legal principles going back 1,500 years were “undermined” by the fact that the warrant for Assange’s arrest was issued by a prosecutor, saying there was no guarantee they would be independent and impartial” like a judge.

She said it was “a serious interference with individual liberty”.

Seven judges — six male and one female — are hearing Assange’s appeal over two days at the court in London and are not expected to return their judgment for several weeks.

Dozens of supporters gathered in bright winter sunshine as Assange arrived as a peace activist outside sang “he shall be released”.

He sat in court flanked by female supporters and near supporter Vaughan Smith, at whose mansion in eastern England Assange has spent most of the last year under virtual house arrest.

If the court rejects his appeal, the former computer hacker will have exhausted all his options in Britain but he could still make a last-ditch appeal to the European Court of Human Rights, prosecutors have said.

Assange denies the rape and sexual assault allegations made by two women in Sweden, and insists the sex was consensual. He has also claimed that the allegations against him are politically motivated.

WikiLeaks has enraged Washington by leaking thousands of classified US documents about the wars in Iraq and Afghanistan and Assange has said he fears he will eventually be handed over to the United States.

While the legal battle has dragged on, Assange’s celebrity status has grown — he is to host his own TV show and will make an appearance as himself later this month on the 500th episode of the US cartoon show Simpsons.

Announcing the chat show, WikiLeaks described its founder as “one of the world’s most recognisable revolutionary figures” and promised interviews with “key political players and thinkers”.

WikiLeaks claims it has secured licensing commitments covering more than 600 million viewers across cable, satellite and terrestrial networks. So far Russia’s state-run RT is the only channel to confirm it will broadcast the show.

Assange’s extradition to Sweden was initially approved by a lower court in February 2011. An appeal to the High Court was rejected in November, but it subsequently granted him permission to appeal to the Supreme Court.

If this appeal fails, the WikiLeaks founder will have only one other option to stop his extradition – an appeal to the European Court of Human Rights in Strasbourg.

“If the ECHR takes the case then his current bail conditions would remain in force and he would remain in the UK until the proceedings at the ECHR have concluded,” the Crown Prosecution Service said in a commentary on the case.

“If the ECHR declines to take the case then he will be extradited to Sweden as soon as arrangements can be made,” England’s state prosecutor said.

Concerning Assange’s case before the Supreme Court, Julian Knowles, an extradition law specialist with the Matrix Chambers law firm, said the question of whether a public prosecutor was a valid judicial authority had been comprehensively tested.