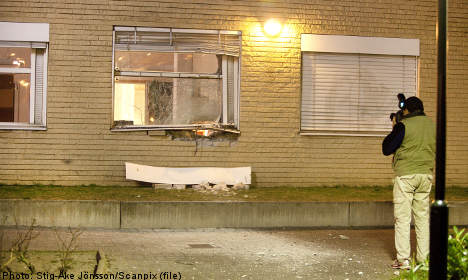 “The entire Swedish police force stands behind Malmö. We have received reinforcements and continue to work under previous guidelines,” said Hans Nordin of the Skåne Police to news agency TT.

On Tuesday night at 7pm, an emergency call was made to alert police that a 48-year-old man had been shot in his car. He died shortly after in hospital.

Later on at 2.30am, a bomb exploded at a nearby police station. The explosion caused extensive damage to the building, although no one was injured.

Police are now actively searching for clues that will lead to arrests, yet have stressed the importance of witnesses coming forward with information about both events.

“It’s important that those who know anything dare to come forward. We protect our witnesses,” said Börje Sjöholm of the Malmö police to TT news agency.

While the bombing of the police station has not been connected by police to the murder, they have labelled the attack as a possible retaliation to their increased attention to crime fighting, particularly in their search for illegal weapons.

This extra police attention has resulted in more violence, with three people being fatally shot only in January this year. Police have been questioned as to whether the additional policing has been a failed crime-fighting attempt.

“No, it’s no failure. But it is very embarrassing that another murder has occurred, and very irritating that we couldn’t do anything to prevent it,” said Nordin to TT.

Ilmar Reeplau, the Malmö mayor, was livid after Tuesday’s turn of events, and also claimed that not enough was being done in the fight against crime.

“It’s bloody awful. We have had a massive police operation on Malmö’s streets, but the violence is only continuing,” he said to the Sydsvenskan newspaper after a visit to the crime scene on Tuesday.

The incident on Tuesday night marks the eighth fatal shooting in the city since May.

“The Swedish law system is being ignored and is not respected any longer,” he said to the Skånska Dagbladet newspaper.

Sweden’s minister for justice, Beatrice Ask, has called for more police in Malmö and has launched an investigation into what many believe to be outdated weapons laws, yet mayor Reepalu, who supported the idea, claimed that more still needs to be done.

“Customs must also get better resources to stop the flow of illegal weapons. The legislation for illegal weapons dates back to the 60s. We must have a modern laws, ”Reepalu told TT.