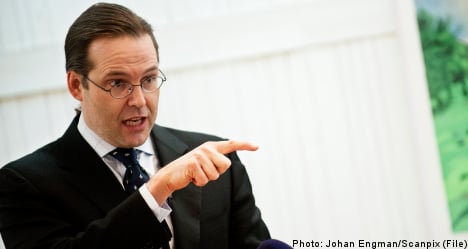 “It will be more robust with more capital, a lower return on capital … and much more prudent when it comes to risk management. Therefore I think they will make a much better contribution to society,” Borg told AFP after delivering a lecture at the Stockholm School of Economics in Riga.

In his lecture in the Latvian capital, Borg said bank owners should be in no doubt about their responsibilities to society as well as their balance sheets.

“Bank owners should know that if they mismanage their bank it will be taken over and their capital will be wiped out,” he said.

“We’ve seen a banking sector with too much risk, too little capital, too weak owners, too weak management that has created excessive leverage, excessive risk taking, and had profit margins that cannot be sustained in future.

“It is a business that will be changing, where the balance sheets will be cut down. This is probably one of the sectors of the European economy that will employ fewer people in the future than they have done. There has been an excessive financial sector that I think cannot be defended in terms of economic fundamentals,” he said.

Europe has made progress in restoring its financial credibility, but more remains to be done, Borg added.

“The whole banking sector is going through an overhaul that will go on for a decade,” he said.

“We have already set in place much tougher regulations, supervision in most countries is strengthened and we are starting to create a European supervision structure that is very important — even if we should probably have gone two, three or even five steps further when it comes to strengthening European institutions in this regard.”

The announcement is intended to aid Sweden in its post-coronavirus economic recovery. Photo: Pontus Lundahl/TT

The key interest rate, the repo rate, will remain unchanged at zero in order to help keep interest rates to both households and businesses low and to support Sweden's economic recovery.

While the central bank, the Riksbank, said it expected the rate to remain at zero for three years, it also noted that it could be cut if necessary.

“The Swedish economy seems to have left the acute crisis situation of the spring and started to recover slightly faster than expected. But it is still a long way back [to the pre-crisis situation], and the situation on the labour market is worrying, with high unemployment as a result of the sharp decline in economic activity in the spring,” said a statement from the central bank on Tuesday.

The bank took the landmark decision to slash the rate below zero in February 2015, hoping that the strategy would boost inflation to raise the price of everyday goods and services which had been stagnant in recent years, and therefore improve the Nordic nation's economic prospects. Almost five years later, it was raised from -0.25 to zero in December 2019, following almost two years of inflation being close to its target of two percent.

In its statement on Tuesday, the bank said inflation had been higher than expected in recent months, but was still forecast to be low overall for 2020. Sweden was already heading towards an economic slowdown even before the coronavirus pandemic, and the crisis has affected the global economy with an impact on Sweden.

“In light of the severity of the crisis and the fact that demand will not be back at more normal levels any time soon, it is expected to take time before inflation is more permanently back close to the Riksbank's target of 2 per cent,” the statement said.

The new forecasts also included a predicted fall in GDP of 3.6 percent this year, which is less dramatic than the predicted drop of 4.5 percent in the previous forecast.

And growth in 2021 was expected to reach 3.7 percent, up slightly from the previous forecast of 3.6 percent.

You can read the full report from the Riksbank here.