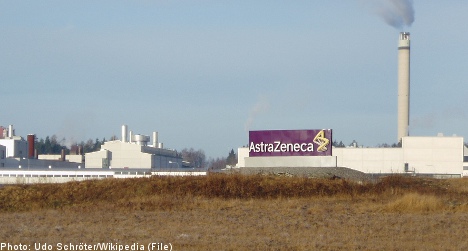 “It might be redundancies, it might be early retirements or jobs elsewhere in the company,” AstraZeneca spokesperson Ann-Leena Mikiver told the TT news agency.

On Thursday, the company said it would axe 7,300 jobs worldwide by 2014 in a new cost-cutting drive, despite delivering bumper annual profits.

The company’s Södertälje workforce will be reduced by between 1,100 and 1,200 workers.

“Today the company announces the start of a new set of restructuring initiatives to further reduce costs and increase flexibility in all functional areas,” the London-listed group said in a results statement.

It added: “The total number of positions expected to be impacted for this phase is estimated to be approximately 7,300.”

Part of the restructuring calls for the closure of R&D activities in Södertälje and the creation of a “virtual” neuroscience team of around 40 to 50 scientists based in Boston in the United States and Cambridge in the UK.

However, AstraZeneca added that the new team would work closely with the Karolinska Institute in Stockholm and that Södertälje would remain “an important part of the AstraZeneca network” because it is the company’s largest manufacturing site and home base for business in the Scandinavian markets.

AstraZeneca’s latest job cuts are forecast to deliver $1.6 billion in annual benefits by the end of 2014, and are part of an ongoing efficiency drive.

The group meanwhile revealed that earnings after taxation surged 23 percent to $9.98 billion last year, compared with $8.053 billion in 2010.

However, AstraZeneca warned that earnings were expected to fall this year as patents on key drugs expire and governments in Europe and the United States squeeze prices.