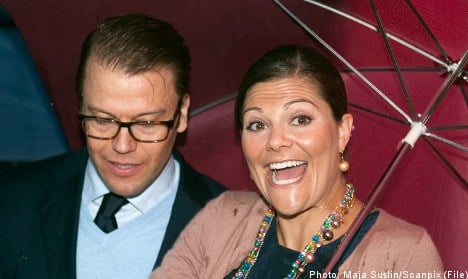 “This birth will bring the royal family, and the country, together,” Roger Lundgren, previous editor of Queen magazine and expert on the Swedish royal family, told The Local.

It is not publicly known where the baby will be delivered, although it has been speculated that the birth will be at Karolinska hospital in Stockholm, where Victoria herself was born.

The day after the birth, the Marshall of the Realm (Riksmarskalken) will announce the heir’s birth to the world to a cannon salute of 42 shots, fired from Skeppesholmen in Stockholm.

The news will then be announced on the Royal Court website, kungahuset.se, as well as the royal family’s official Facebook page, which has been a recent development in the family’s push to embrace social media.

Launched in November, the page has almost 11,000 subscribers so far.

“I’ve been nagging the family for four years to get this Facebook page, and I am glad it’s going to be put to good use. The family has embraced the concept, and the public reaction has been fantastic,” said Lundgren.

“Now I’m working on convincing them to use Twitter… but that may take some time”.

The King will deliver news of the baby’s name and titles the next day at a Cabinet Council, or if the birth is on a Saturday, on the following Monday.

The birth will also be followed by the “Te Deum”, a type of thanksgiving, held the day after the birth in the Royal Chapel.

This is an ancient religious ceremony, and occurs with many major important events in the royal family, such as baptisms, birthdays, and.

The Swedish royal family has come under fire in recent months, with one controversy seemingly following another, however Lundgren predicts that the birth will revert the Swedish perception of the wedding to time of the royal wedding in 2010.

“The wedding was a spectacular event for Sweden, it captured the entire country. People who were previously indifferent to the monarchy thought ‘hey, I had no idea… this really touched me,’” said Lundgren.

“It will hopefully be the same thing with the birth. There hasn’t been a royal birth in Sweden since Princess Madeleine in 1982, so it’s been a long time coming, but it was definitely worth the wait.”