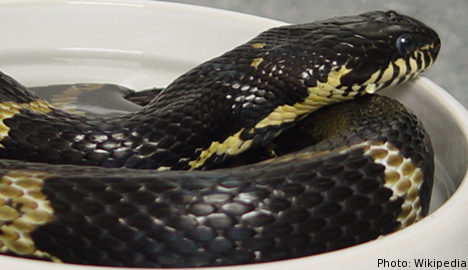 The rat snake in the picture is not the serpent mentioned in the article.

“I have been here for 30 years and have never experienced anything like this, it is an incredible story,” said hotel manager Anders Nilsson about the incident to local paper Örnsköldsviks Allehanda.

The woman, who often stays at the hotel when she visits the town, was working in her room during the evening when she noticed her dog giving the trouser press a lot of attention.

Curious, she went over to see what was going on and saw that someone had left a belt hanging off the press.

On closer inspection, however, the belt turned out to be a snake, which was busy checking out the dog barking at it.

“When they called from reception that night I thought that I had misheard them. The line was not so good, but it turned out to be a snake,” said Nilsson to the paper.

By the time Nilsson arrived at the hotel, the police were already there. After dismantling the trouser press, the officers managed to free the snake.

Once free, the police didn’t want to take any risks with the yet unidentified snake and it was subsequently put to death with the help of a police baton, the paper reports.

A snake expert was later called to the hotel and could quickly determine that the offending intruder was a perfectly harmless Russian rat snake, also known as a Manchurian black water snake, a popular choice of pet among snake enthusiasts.

How the sneaky serpent found its way into the trouser press is still not known, though it is suspected that it has either been left there by a previous guest or escaped its owner.