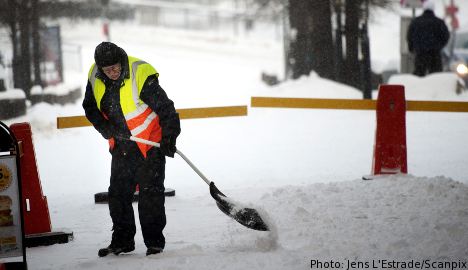 ”People are advised to be careful when driving,” said Lisa Frost, meteorologist at the Sweden’s Meteorological and Hydrological Institute (SMHI) to daily Aftonbladet.

Many accidents occurred after the heavy snowfall due to strong winds blowing away the salt and sand that had been laid down to combat slippery roads.

Around 5pm on Thursday a woman with a walker was run down by a car at a zebra crossing after the driver was unable to stop the car on the slippery surface.

Several other accidents were reported over night. In the Sundsvall area on the Swedish east coast, seven people were brought to hospital after six separate traffic incidents and in Småland further south, three women were seriously injured after a head on collision between two vehicles.

In the Gävle area, a crash involving a car and a bus forced emergency services out as well, with two of the car passengers needing medical treatment.

”One person was knocked unconscious and had to be cut loose from the wreck,” said Kenneth Rosenqvist, of the Gävleborg emergency services to news agency TT.

The snowfall is expected to continue on Friday and SMHI has issued several warnings for the eastern part of the country.

”In some places it could fall up to 20 centimetres of snow,” said Frost to Aftonbladet.

The south eastern coastline will be getting the brunt of the snow, as well as the Baltic islands of Öland and Gotland, and SMHI is urging anyone who has to drive to take it easy in traffic.

Last night also measured the coldest temperatures so far this winter, with well below -30 degrees Celsius. In central parts of the country the lowest temperature measured was -31 in the skiing resort Idre. Southern Sweden saw temperatures reaching -16.

And according to forecasters, it is only going to get colder.

”On Saturday we estimate that it will be -44 centigrade in Norrland,” said John Ekwall, meteorologist at SMHI to daily Expressen.

The cold will peak during the coming weekend with daytime temperatures of -10 or lower in the south and down towards -30 in the north.

Forecasters predict that the cold will ease a little toward the beginning of next week when south-westerly winds will shift the Russian low pressure area down south.

However, according to meteorologists it looks like the cold weather is here to stay for some time yet.