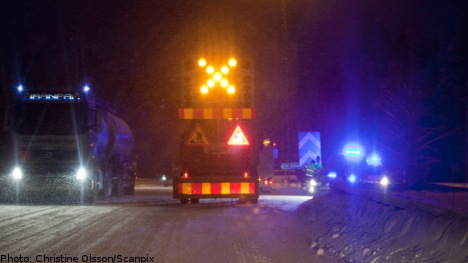 The decision was taken to enable emergency services to clear the road of cars and debris following the slew of accidents.

Despite the large number of vehicles involved in the accidents there were no reports of any injuries.

The harsh weather which has swept across the country in recent had consequences for traffic in several areas, especially around Stockholm and further south.

As temperatures plunged towards -15 degrees Celsius in Stockholm, police reported that 55 accidents had been recorded in the county over the course of the day.

One person was seriously injured in a crash involving two cars on Nockeby bridge shortly after 2pm.

The Baltic island of Öland decided to suspend school transport services on Friday morning due to persistent snowfalls.

“If you don’t really have to go outside it is best to stay home,” said Hasse Johannesson, responsible for clearing snow from roads on Öland, to radio station SR Kalmar.

The wintry weather, dubbed in the media as the “Siberian chill”, swept across Sweden earlier in the week abruptly ending a long period of unseasonably mild weather.

Most of Norrland is currently experiencing temperatures of -30 degrees Celsius and below, with the -42 degrees Celsius recorded in Kvikkjokk constituting a record for the winter so far.

The cold weather is meanwhile set to retain its tight grip on the country in the coming days with forecasts indicating that Stockholm residents can look forward to lows of -20 degrees Celsius on Sunday.