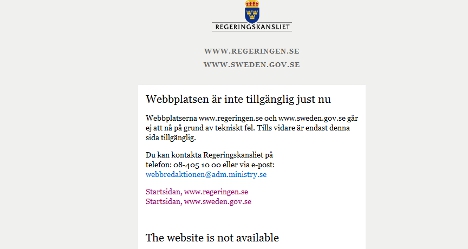 Visitors to regeringen.se and sweden.gov.se were greeted with the following message on Saturday morning:

“Due to technical problems the websites www.regeringen.se and www.sweden.gov.se are not available.”

Anonymous Sweden claimed responsibility for causing the problems in its Twitter feed on Saturday.

The Local’s attempts to gain confirmation from the Government Offices over the alleged attacks have thus far proved unsuccessful.

By midday on Saturday the websites were back in service, albeit intermittently and running slowly.

Anonymous meanwhile continued to use various Twitter feeds to claim that the attacks would continue, calling for help to overload the government’s servers.

The group has claimed credit for a spate of attacks on high profile websites in recent days, including the Boston police department and the Greek finance ministry.

On Friday a taped conversation between the US FBI and the UK Scotland Yard discussing investigations into file sharing and internet piracy was published on The Pirate Bay and other websites.

The tape was obtained, Anonymous claimed, by hacking into the FBI’s phone system and intercepting the conference call.